Pompeii was an ancient Roman town-city near modern Naples, in the Campania region of Italy, in the territory of the comune of Pompei. Pompeii, along with Herculaneum and many villas in the surrounding area, was mostly destroyed and buried under 4 to 6 m (13 to 20 ft) of volcanic ash and pumice in the eruption of Mount Vesuvius in AD 79.

Researchers believe that the town was founded in the seventh or sixth century BC by the Osci or Oscans. It came under the domination of Rome in the 4th century BC, and was conquered and became a Roman colony in 80 BC after it joined an unsuccessful rebellion against the Roman Republic. By the time of its destruction, 160 years later, its population was estimated at 11,000 people, and the city had a complex water system, an amphitheatre, gymnasium, and a port.

The eruption destroyed the city, killing its inhabitants and burying it under tons of ash. Evidence for the destruction originally came from a surviving letter by Pliny the Younger, who saw the eruption from a distance and described the death of his uncle Pliny the Elder, an admiral of the Roman fleet, who tried to rescue citizens. The site was lost for about 1,500 years until its initial rediscovery in 1599 and broader rediscovery almost 150 years later by Spanish engineer Rocque Joaquin de Alcubierre in 1748. The objects that lay beneath the city have been preserved for centuries because of the lack of air and moisture. These artifacts provide an extraordinarily detailed insight into the life of a city during the Pax Romana. During the excavation, plaster was used to fill in the voids in the ash layers that once held human bodies. This allowed one to see the exact position the person was in when he or she died.

Pompeii has been a tourist destination for over 250 years. Today it has UNESCO World Heritage Site status and is one of the most popular tourist attractions in Italy, with approximately 2.5 million visitors every year. 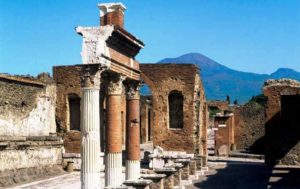 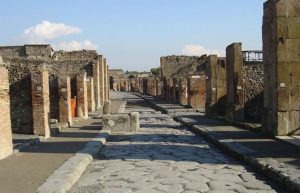 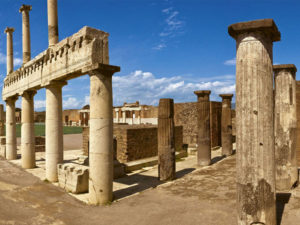 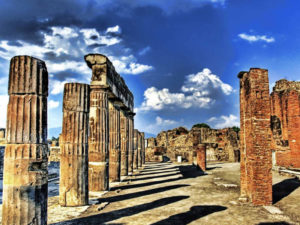 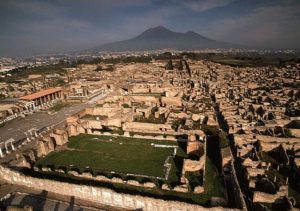 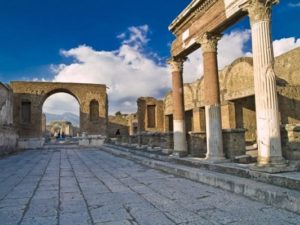 The Royal Palace of Caserta is a former royal residence in Caserta, southern Italy, constructed for the Bourbon kings of Naples. It was the largest palace and one of the largest buildings erected in Europe during the 18th century. In 1997, the palace was designated a UNESCO World Heritage Site; its nomination described it as “the swan song of the spectacular art of the Baroque, from which it adopted all the features needed to create the illusions of multidirectional space”.In terms of volume, the Royal Palace of Caserta is the largest royal residence in the world[2] with over 2 million m³ and covering an area of about 235,000 m².

The construction of the palace was begun in 1752 for Charles VII of Naples, who worked closely with his architect, Luigi Vanvitelli. When Charles saw Vanvitelli’s grandly scaled model for Caserta, it filled him with emotion “fit to tear his heart from his breast”. In the end, he never slept a night at the Reggia, as he abdicated in 1759 to become King of Spain, and the project was carried to only partial completion for his third son and successor, Ferdinand IV of Naples.

The political and social model for Vanvitelli’s palace was Versailles, which, though strikingly different in its variety and disposition, solves similar problems of assembling and providing for king, court and government in a massive building with the social structure of a small city, confronting a baroque view of a highly subordinated nature, la nature forcée. The population of Caserta Vecchia was moved 10 kilometers to provide a work force closer to the palace. A silk manufactory at San Leucio resort was disguised as a pavilion in the immense parkland.

Another of the king’s primary objects was to have a magnificent new royal court and administrative center for the kingdom in a location protected from sea attack, and distant from the revolt-prone and congested city of Naples. To provide the king with suitable protection, troop barracks were housed within the palace. 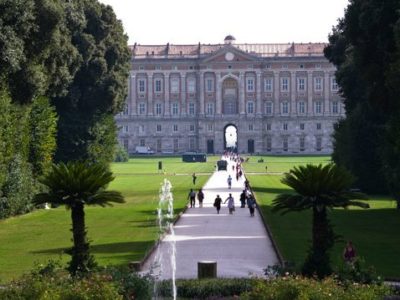 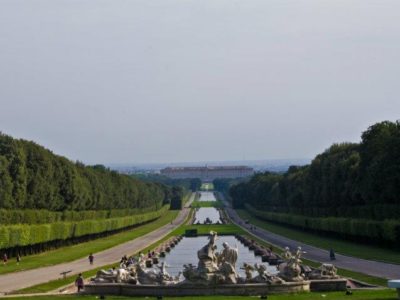 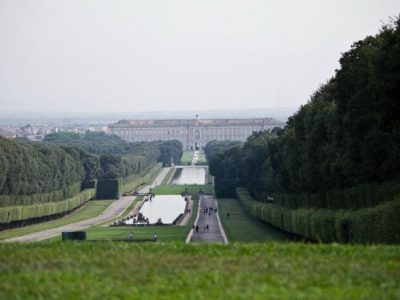 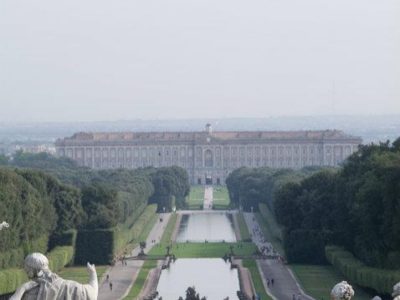 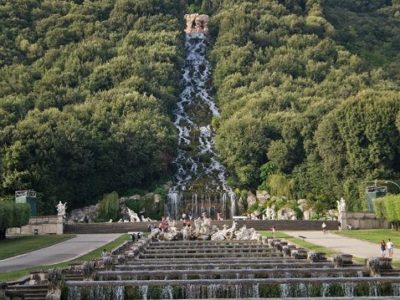 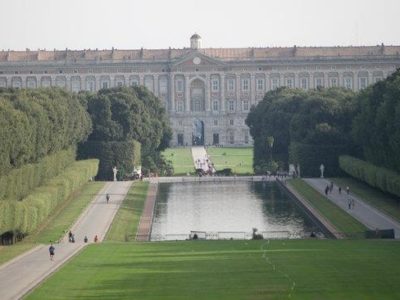 Mount Vesuvius is best known for its eruption in AD 79 that led to the burying and destruction of the Roman cities of Pompeii, Herculaneum, and several other settlements. That eruption ejected a cloud of stones, ash, and fumes to a height of 33 km (20.5 mi), spewing molten rock and pulverized pumice at the rate of 1.5 million tons per second, ultimately releasing a hundred thousand times the thermal energy released by the Hiroshima bombing. An estimated 16,000 people died due to hydrothermal pyroclastic flows. The only surviving eyewitness account of the event consists of two letters by Pliny the Younger to the historian Tacitus.

The area around Vesuvius was officially declared a national park on June 5, 1995. The summit of Vesuvius is open to visitors and there is a small network of paths around the mountain that are maintained by the park authorities on weekends.
There is access by road to within 200 metres (660 ft) of the summit (measured vertically), but thereafter access is on foot only. There is a spiral walkway around the mountain from the road to the crater. 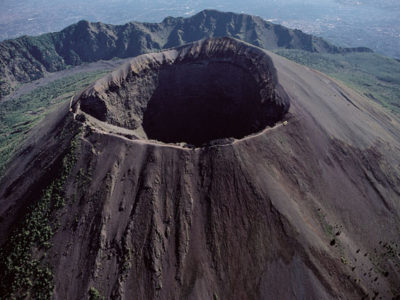 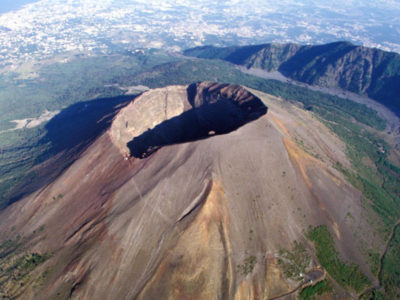 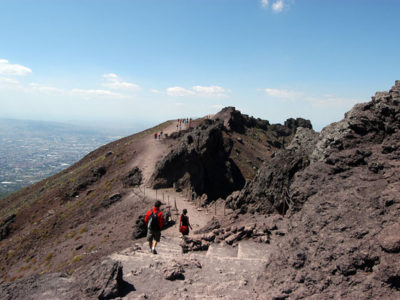 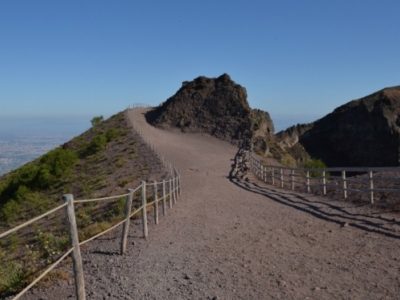 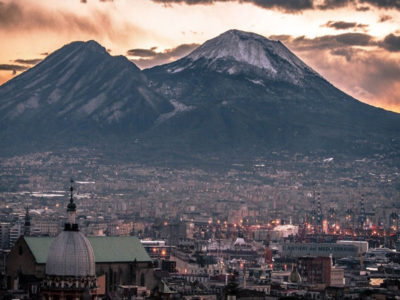 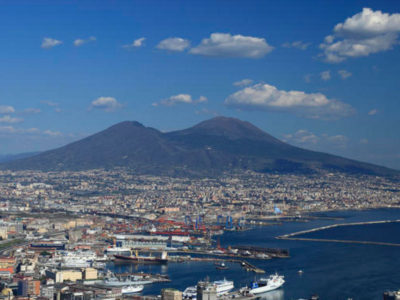 The Amalfi Coast is a stretch of coastline on the southern coast of the Sorrentine Peninsula in the Province of Salerno in Southern Italy. The Amalfi Coast is a popular tourist destination for the region and Italy as a whole, attracting thousands of tourists annually. In 1997, the Amalfi Coast was listed as a UNESCO World Heritage Site as a cultural landscape.

The Amalfi Coast is known for its variety: each of the countries of the Coast has its own character and its traditions. They are part of the coast the following municipalities: Amalfi with its Cathedral and its cloister (Paradise Cloister), Atrani with the churches of San Salvatore of Birecto and Santa Maria Maddalena,Cetara (the country of anchovy), Conca dei Marini (the country of sfogliatella) with its Grotta of Smeraldo, rare beauty and the Church of San Pancrazio with its Belvedere, Furore with a small fjord, Maiori with the Collegiate Church of Santa Maria a mare and the Castle of San Nicola de Thoro Plano, Minori with the Basilica of Santa Trofimena and the Roman Villa, Positano with the Church of the Assumption and the charming old town, Praiano with the churches of San Luca and San Gennaro and related Belvedere, Ravello with its characteristic Terrace of the sea of Villa Cimbrone and the flowering gardens of Villa Rufolo, Scala the oldest town on the Amalfi Coast, Tramonti , Vietri sul Mare known around the world for its ancient pottery tradition and Raito. 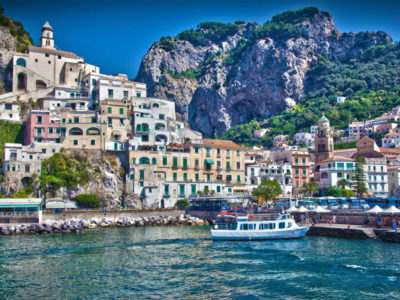 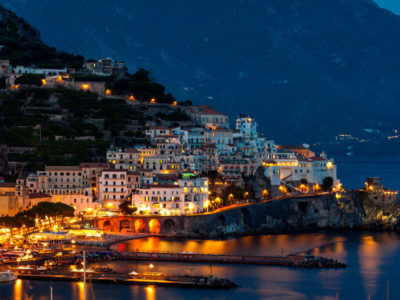 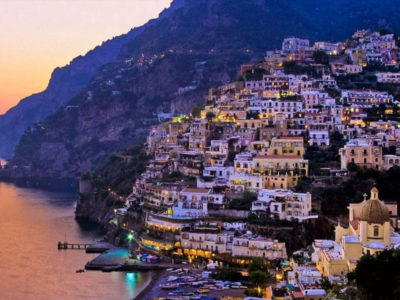 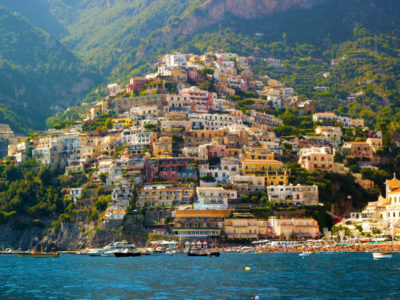 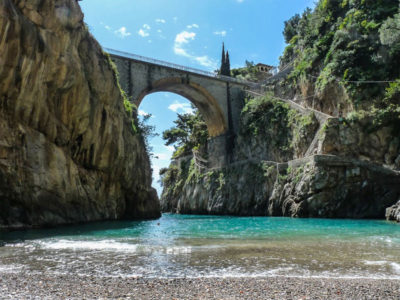 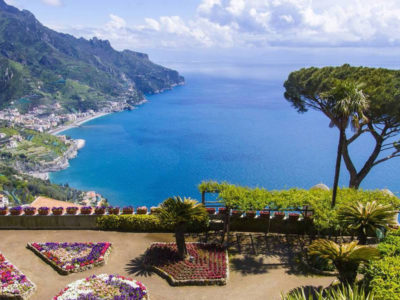 The island is, unlike the nearby Ischia and Procida, of karstic origin. Initially it had joined the Sorrento Peninsula, unless subsequently be submerged by the sea and then separated from the mainland, where today is the strait of Bocca Piccola. Capri has a complex morphological structure, with peaks of medium height (Monte Solaro 589m and Monte Tiberio 334m) and a lot of interior highlands, including the main one called Anacapri. It is the twenty-first place among the Italian islands in order of size. The coast is indented with numerous coves and bays that alternate with steep cliffs. The caves, hidden beneath the cliffs, were used in Roman times as nymphs of the sumptuous villas that were built here during the Empire.

The most famous is undoubtedly the Grotta Azzurra, where magical light effects were described by many writers and poets. Characteristic of Capri are the famous Faraglioni, three small rocky islets just off the shore, creating an amazing effect; to them they were also assigned names to distinguish them: Stella is attached to the mainland, Faraglione di Mezzo for that interposed the other two and Faraglione di Fuori (or Scopolo) to the farthest island. The island contains many plant and animal species, some endemic and rare, such as the blue lizard, which lives on one of the three Faraglioni. The vegetation is typically Mediterranean, with a prevalence of agave, prickly pears and gorse. In Capri there are no more drinking water sources and water supply is secured by underwater pipelines from the Sorrento peninsula. The electricity is supplied by a private company on site. The main population centers of the island are Capri, Anacapri, Marina Grande and the other sea side of Capri, Marina Piccola. 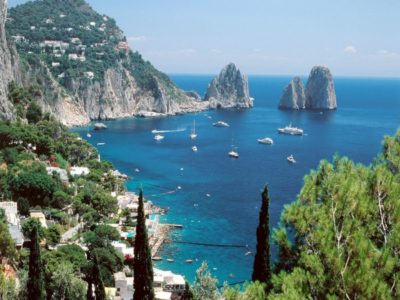 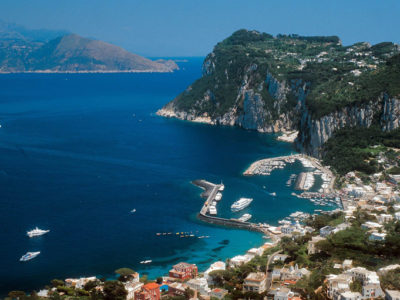 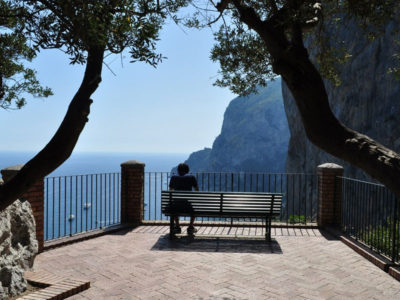 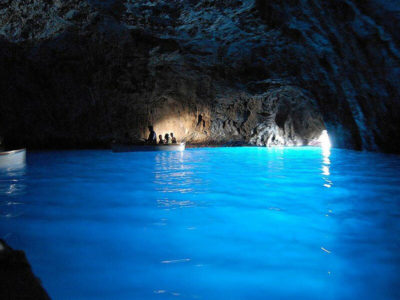